It isn't going well for Avinash: 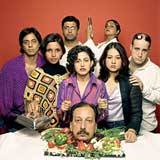 his new film has major logistical problems, someone has parked in his spot, his girlfriend has been busy all week, his wife is seeing someone half her age, his self-help yoga tape is stressing him out, his friend is on the run from the cops, his son has just told him he's gay and his daughter has just told him she's pregnant.

And now he's having a heart attack, during what may just be the best sexual experience of his life.

Now with more Salsa than ever before!!

A fun-filled evening for all those over 12 years old and under 160 pounds!!