"YOU SHOULD CUT ALL TIES AND STAND APART. STOP ALL THOUGHTS OF THE OUTSIDE AND SEAL YOURSELF OFF. DON'T PUT OUT FEELERS TO THE OUTSIDE, PUT UP WEAPONS. BE LIKE A JELLYFISH: BLIND AND CLOSED OFF. WHOEVER GETS CLOSE, GETS BURNT. IN COLD BLOOD. SILENCE YOUR MOUTH, DEAFEN YOUR EARS AND ACT!"

The simple act of reading some plays can suggest a way of performing them. Marius von Mayenburg's "fireface" isn't one of these. Exploring the script -- part dystopian family portrait, part gruesome cartoon of adolescent rebellion, thwarted communication & sexual dysfunction [all this plus an obsessive heraklitus-reading arsonist...] - various possibilities began to suggest themselves. We have attempted to avoid locating our production too specifically in any particular time or place.

Director Pushan Kripalani seems to fancy plays that blur the line between sadism and masochism, humanity and brutality, normalcy and perversity. His last play, Jean Genet's The Maids in 2004, had two maids mutilate the mistress they love and hate, play power games with each other, and finally, turn the knife on themselves. His latest, on German playwright Marius von Mayenburg's Fireface, is centred on an atypically dysfunctional family: a boy addicted to arson, his incestuous relationship with his sister, and their parents in denial.

Mayenburg is certainly an iconoclast when it comes to the family. The boy even feels that birth is life's first insult. The cycle of destruction initiated by the boy - he makes bombs and burns buildings - eventually returns to its starting point. The boy is so enraptured by the beauty of fire that a burning curtain circling the air settles on his face - and burns it. "As long as you burn fuel, you're alive," is the boy's raison d'etre.

Kripalani's direction is soft-edged, subtle, simple - and effective for these reasons. With an almost-bare stage, black costumes and light emanating from the wings, it finds full expression in the hints: the bandages that cover singed flesh, the boy's murdering hammer raised over his parents, the screams of the terrorised in darkness. But mostly, in the fact that fire - so central and almost palpable - remains unseen. Until the evocative end, when a muted flame from a lighter suggests the hungry and voracious tongues of fire. 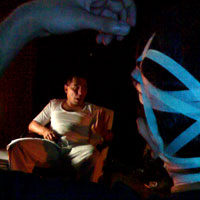