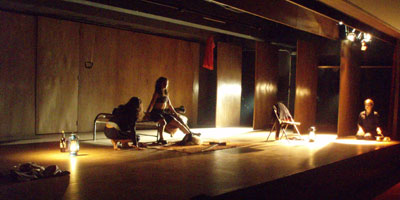 JUDITH: Am I speaking too much? You have revealed so much I feel I should also, but perhaps that's wrong. You might wish me to be silent. You might wish to imagine me rather than to know me. That is the source of desire, in my opinion. Not what we are, but the possibilities we allow to others to create us. Silence, for example, might be judged as mystery.

from THE BOOK OF JUDITH, Chapter 13:

3. And Judith was alone in the chamber.
4. But Holofernes lay on his bed, fast asleep, being exceedingly drunk.

5. And Judith spoke to her maid to stand without before the chamber, and to watch:
6. And Judith stood before the bed praying with tears, and the motion of her lips in silence,
7. Saying: Strengthen me, O Lord God of Israel, and in this hour look on the works of my hands, that as thou hast promised, thou mayst raise up Jerusalem thy city: and that I may bring to pass that which I have purposed, having a belief that it might be done by thee.
8. And when she had said this, she went to the pillar that was at his bed's head, and loosed his sword that hung tied upon it.
9. And when she had drawn it out, she took him by the hair of his head, and said: Strengthen me, O Lord God, at this hour.
10. And she struck twice upon his neck, and cut off his head, and took off his canopy from the pillars, and rolled away his headless body. 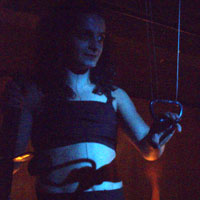 11. And after a while she went out, and delivered the head of Holofernes to her maid, and bade her put it into her wallet.
12. And they two went out according to their custom, as it were to prayer, and they passed the camp, and having compassed the valley, they came to the gate of the city.
13. And Judith from afar off cried to the watchmen upon the walls: Open the gates for God is with us, who hath shewn his power in Israel. 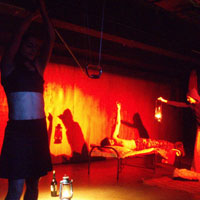