"What wish is enacted, what desire is gratified, by the fantasy that real events are properly represented when they can be shown to display the formal coherency of a story? HAYDEN WHITE 'THE CONTENT OF THE FORM'

JIAN. AN OPEN-ENDED VIDEO WORK, CONSISTING OF AN INDEFINITE NUMBER OF SHORT FILMS LINKED BY A SET OF RECURRING CHARACTERS.

The project, as initially conceived in 2001, was a series of 3 linked films that examined centrality and peripherality in formal narrative, simultaneously constituting an extended if somewhat loosely-structured meditation on the fifty-third hexagram of the I Ching ['Advancing'].

However, during the course of shooting and editing, a series of persistent and eventually overpowering centrifugal impulses disrupted the original schema, and discontinuities brought to light through this process prompted a decision to allow the material to splinter into a series of shorter texts, more widely discursive and more tenuously linked, each contributing towards a larger general exploration of the role/s and processes of narrativizing in our lives.

JIAN, re-envisaged as an ongoing work in progress, is an installation piece devoted to the scrutiny of rhetorically constructed narratives of reality and identity. 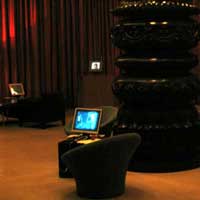 JIAN HAS BEEN INSTALLED AT: